To be accurate most of the Indian Heaven Wilderness, located southwest of Mt. Adams, is a sub-alpine area. The Wilderness is situated on a high plateau, averaging about 5,000 feet in elevation, with many open meadows and over 150 lakes. The area is famous for its huckleberry fields.

But, alpine or sub-alpine, it’s one of the premier hiking areas in the Pacific Northwest.

In early summer I parked at the East Crater Trailhead on the south side of the Wilderness. The trail took off northwest through a mountain hemlock forest, with noble fir trees becoming more prevalent as elevation was gained. After 1 1/2 miles I began passing small ponds covered in floating grasses. Huckleberry bushes were everywhere but not a berry in sight. In another month or so the huckleberries will be at their prime in the higher elevations.

At 2 1/2 miles Junction Lake was reached, the first of many larger lakes along the Trail. I took a four-mile loop hike through large meadows and by multiple lakes. Lemei, Clear, Deer, Elk and many smaller lakes were passed.

Soon I rejoined the Pacific Crest Trail and returned to Junction Lake. By this time the mosquitoes had just about worn me down and I wasn’t the only one. A backpacking father and two college-aged sons met me on the trail. As we were all swatting at the swarming skeets, they somewhat sheepishly admitted that their original plan was to camp at Bear Lake for two nights. But, after one night of the skeets, they were headed out of the Wilderness. We all agreed it was a much nicer place to visit in the fall when the skeets are gone.

All in all the hike was 9.5 miles in length with 1,500 feet of elevation gain. Indian Heaven (mosquitoes or no mosquitoes) remains one of the prettiest wilderness areas near Portland.

One of many pretty lakes near the trail 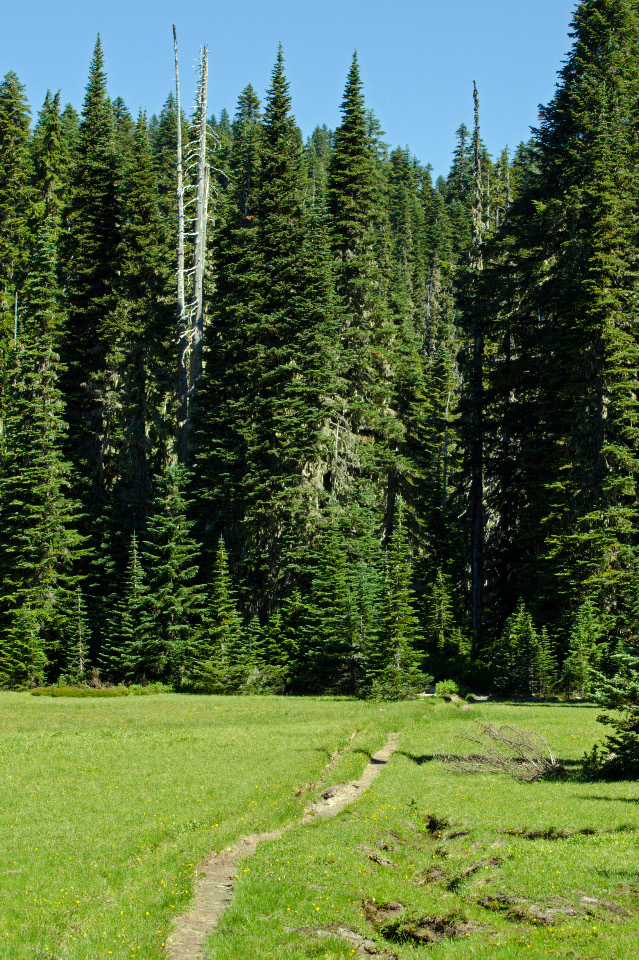 Trail leading through one of the many large meadows