Champoeg Park to Butteville Store – An Interesting Journey through History

Champoeg Park is on the Willamette River about 20 miles south of Portland. By a vote of 52-50 in 1843 by the settlers of the area, Oregon became a provisional territory of the United States. There was a city at Champoeg (cham-poo-e’) at one time, but several floods in the late 1800s destroyed most of the buildings. The settlers were faced with three choices. First, use their own money and labor to rebuild on the floodplain and face more flooding in the future. Second, use their own money and labor to rebuild at a higher elevation. Third, use OPM (other people’s money) to rebuild on the floodplain. However, the only way to obtain OPM for your own private use in the 1840s was at the point of a gun, a practice greatly frowned upon. So, the settlers made the wise decision to move their homes to higher ground. Think of the contrast to today’s world. Now, state and Federal governments have the size and power to easily appropriate OPM for rebuilding homes, businesses, etc. along floodplains for the benefit of private individuals. I like to think the old-time settlers of Champoeg would still make the same decision today that they made over a century ago. They were a hardy stock of folks.

As I parked at the rest area on a dreary, cloudy day in late January, I couldn’t help notice how high the Willamette River was. Part of the path to the north was under water. After a short detour, I visited the pavilion and monument commemorating the historic event of 1843.  Taking a short loop to the west along the River, I quickly ran out of trail due to high water. The cottonwood trees were very large, as big as any I have ever seen. After returning to the pavilion, I began hiking to the east on a cinder path, soon turning to a paved path, along the River. The Trail passed a log cabin, detoured to an 1845 pioneer woman’s gravesite, explored a nature hike loop, and then began the two-mile trek behind La Butte to Butteville, a scenic little town on the Willamette River.

After taking a break at the Butteville Store, originally opened in 1863, I began the hike back to the Trailhead. All in all the hike was 8.4 miles in length with several hundred feet of elevation gain. Geese, some small songbirds, frogs chirping in the backwaters and an Oregon newt added to the pleasure of the hike.

Trek Tip 4: The glass is always more important than the camera body. Don’t buy a good camera body and rely upon a cheap lens. All the megapixels and whiz bangs will be of little import without a sharp, clear and relatively fast lens.

Oregon Newt (camouflage expert and, no, it’s not running for office) 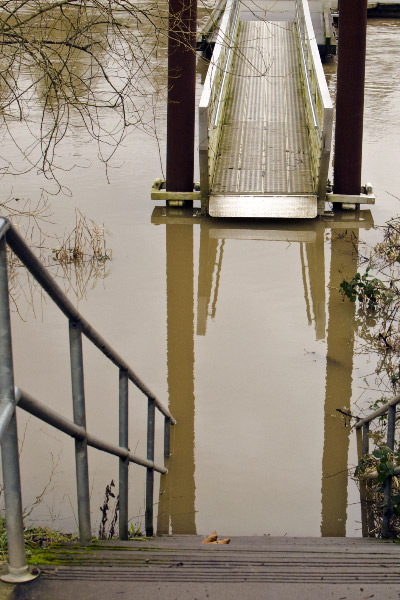 One would need a swimming suit to reach the floating dock

Cottonwoods reflected in a very high and muddy Willamette River 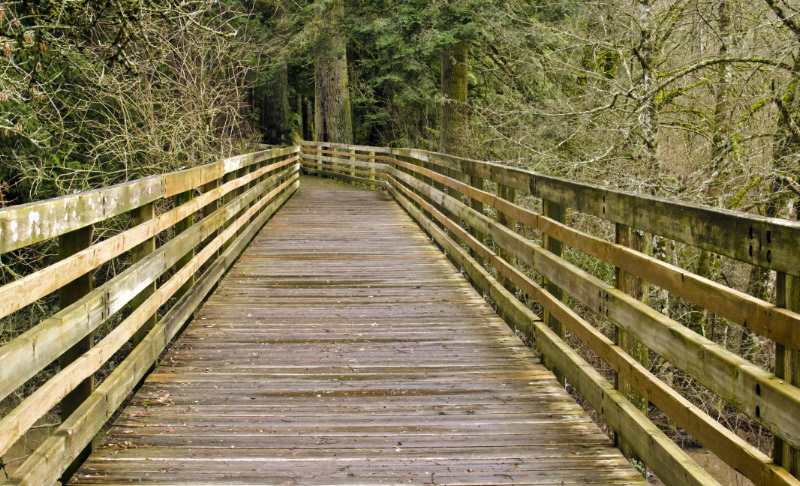 Fence along the footpath